Vicus Limited was established in 2005 with the purpose to invest in the property markets of Russia, Ukraine and the Baltic States. The fund raised equity investments totaling 75 MEUR from investors which include institutional investors as well as high net-worth individuals and family offices.

The funds were invested in commercial real estate development projects in the target markets during 2005-2010. With most investments already divested, Vicus continues to own a minority share in a prominent business center Pulkovo Sky in St. Petersburg and a minority share in the shopping mall 4Daily in Moscow.

Pulkovo Sky is a modern business center located at the Pulkovo Airport in St. Petersburg. The business center, operational since 2009, has a gross leasable area of 45 000 square meters. Gazprom is the anchor tenant in the business center. A large parking facility has room for 850 cars.

Pulkovo Sky is characterized by efficient architectural solutions and state-of-the-art building technologies, and has won numerous awards. In 2011, it was chosen by the end users as the best business center in St. Petersburg. In 2017, it was nominated as one of the Top 100 office properties in Russia. Pulkovo Sky is a joint project of EKE Group (60 %) and Vicus (40 %).

Vicus participated in the development of a 100 000 sqm multi-functional area project in Mytischi, one of the fastest growing cities in Moscow Region immediately bordering the city of Moscow and the Moscow Ring Road (MKAD). The area project is located in the middle of New Mytischi, where huge amount of new housing is being constructed such as over a 1 000 000 sqm Yaroslavsky residential district by PIK Group and Novoye Medvedkovo district by INGRAD.

The first phase of the area project, 4Daily Mall with GLA of 25,000 sqm was opened for public in April 2017. 4Daily is jointly owned by Vicus, SRV and the Russian non-governmental pension fund Blagosostoyanie managed by Trinfico.

Vicus is a minority owner in a joint venture, which holds a portfolio of attractive development sites in several regional cities in Ukraine. The other owners of the joint venture are Finnish and Estonian investors including Trigon Capital and the Hartwall and Therman families.

Vicus participated in the development of a 100 000 sqm multi-functional area project in Mytischi, one of the fastest growing cities in Moscow Region immediately bordering the city of Moscow and the Moscow Ring Road (MKAD). The area project is located in the middle of New Mytischi, where huge amount of new housing is being constructed such as over a 1 000 000 sqm Yaroslavsky residential district by PIK Group and Novoye Medvedkovo district by INGRAD.

The second phase of the area project, Mira Development, comprises a site of 1.4 ha with a building permit for 42 000 square meters of commercial premises. Vicus divested its stake in Mira Development in the end of 2018.

Vicus participated in the development of a 4.6 ha land plot by the Boryspil Highway near Kiev International Airport together with Eurocon Ukraine, part of the Estonian construction group Nordecon. The land plot is suitable for commercial use (logistics, retail or offices).

Vicus divested its stake in the project in the end of 2018.

Komodor is one of the first Class A warehouse complexes in Kiev, and widely acknowledged for its high technical quality and professional management. The warehouse complex is located along the Zhytomir Highway, the main traffic artery between Kiev and Western Europe.

Operational since 2008, the facility of 68 000 square meters is almost fully leased to strong international and local tenants, such as Oriflame, Tarkett and Eldorado. Komodor was a jointly developed project of Vicus (40 %), PPF Real Estate (40 %) and Quadrum (20 %).

Vicus sold the property to an Estonian real estate investment fund in January 2013.

In 2005 - 2006, Vicus developed a portfolio of three commercial properties in Estonia and Latvia. The properties, fully leased to DHL, K-rauta and Efore, were divested in the end of 2007 to a German real estate investment fund.

Vicus invested in a project where a historical building was reconstructed into a shopping gallery in the centre of Lviv, Western Ukraine. Opera Passage shopping gallery with a GLA of 3 000 square meters opened in 2009. Vicus sold its share in the project to a Western investor in June 2009. 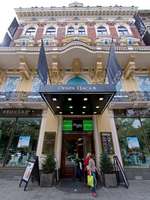 Vicus developed a shopping center project on the 3.1 ha site located in Pašilaičiai, Northwestern Vilnius, right next to the Vilnius Western Bypass, and sold it before construction phase to a local buyer in November 2016.